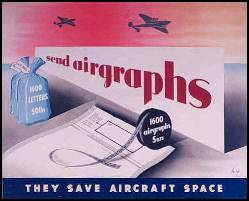 RIGHT BACK AT YOU!

It took a while to establish service in the other direction, though, as getting Cairo set up to transmit had been the first priority, and getting London set up to transmit turned out to be more complicated. By the time the first dispatch left London nearly 1,000,000 Airgraph messages had been received in Britain, that from official records. The first Airgraph from the UK was sent in August by Her Majesty Queen Elizabeth (wife of King George VI and mother of the current Queen) to General Sir Claud Auchinleck, Commander-in-Chief, Middle East Forces, conveying a formal message to inaugurate the service. Shown below, it has serial number one!

The A to Z of Airgraphs: Foreign Forms

Airgraph forms were produced in many countries, from Aden to Zanzibar, wherever needed, and in whatever language was appropriate. Troops stationed there would use these local forms, which were then sent to the nearest processing station. The basic format of all forms had to be the same, of course, to conform to the processing system. Forms printed outside the UK can be identified in various ways - some by mention of local currency, others by variations in the instructions, or by local postage imprints (see below).

WHERE ARE ALL THE FORMS?

Forms were destroyed once it had been confirmed that a film had been received, processed and satisfactory prints made. Thus apart from those returned to the senders, and a few which were sent by ordinary mail, properly used Airgraph documents are exceedingly scarce, and are highly prized by collectors. 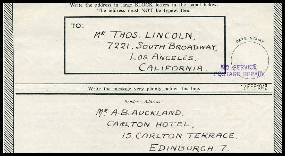 The few used forms that are seen are usually those returned to sender, and usually have an explanatory note or handstamp giving the reason for the return. From within the UK, the following handstamps are known: "NO SERVICE - POSTAGE REPAID," "TRANSMITTED BY ORDINARY MAIL - NO AIRGRAPH SERVICE AVAILABLE TO ADDRESS," "AIRGRAPH SERVICE NOT AVAILABLE TO LOCATION OF SHIP - FORWARDED BY ORDINARY MAIL." Similar manuscript endorsements are known from other theatres, but forms with any endorsement or handstamp are uncommon.

THE END OF THE "CLARE"

CZ CLARE departed Lagos at daybreak for Bathurst, refuelling at Freetown. At Bathurst ?CZ was refuelled and a new crew (Captain Musson, First Officer A.D.C.Jenkins, Second Officer A.O.Cundy,& Radio Officers E.F.G.Brent & J.A.Wycherly) took over for the sector to Lisbon. Captain Musson liked to fly tangents to a 60 n.m.circle round Dakar. One hour out of Bathurst the Captain decided to return, having lost an engine. Minutes later a request for ?Flares? was followed by ?SOS Fire?. ?CZ CLARE crashed in the dark some 30 minutes flying time from Bathurst. The next day all available aircraft searched without success. On 16 September a BOAC Catalina (Captain J.C.Parker, Second Officer Talbot & Navigator D.McGregor) searched to the west of the assumed track - McGregor had flown with Captain Musson ? finding six bodies and wreckage.

In November 1941, Canada initiated its own independent Airgraph service, which lasted until July, 1945. But that's another story.

Inspired by Great Britain's example, the USA instituted its own version of the Airgraph, called V-Mail. For much more about that, please visit my V is for V-Mail page.

This page is based on an article by Stephen Dunderdale, noted Airgraph collector in the UK, who also supplied most of the images for this page.

The premier Airgraph dealer is Alan Berman, dealer in UK postal history, whose stock features an exceptional selection of Airgraphs. He also conducts regular auctions, which usually include important Airgraph material. Alan most graciously consented to my use of images from his web site, all of which are credited above - let your mouse arrow rest over any image for more information about it. Visit Alan's web site to see over a thousand images of Airgraphs and related material, most of it for sale.

AIRGRAPH, by E.H. KEETON, pub. January 1987, Forces Postal History Society, 260pp. This details all the known types of Airgraph forms, listing them by country or area in which they were produced.

Below are links to other sites with information and images about Airgraphs.