Duck stamps are issued annually by the US Fish and Wildlife Service as proof of payment of the fee for a Migratory Bird Hunting License. Proceeds from sale of the stamps are used to preserve wetlands. Technically a form of Revenue stamp (hence a Cinderella), these have been issued every year since 1934, and are a popular collecting sideline among stamp collectors, though they have no postal validity. Many consider them exemplary of the best work from the BEP, and the most handsome stamps produced in the US, since they are printed in relatively small quantities, so the quality remains high. Once applied to a license, these stamps must be signed to validate them! Each year's design is chosen through an open competition, an approach that has been used only a few times for US postage stamps - most notably for "The Prexies", our definitive series (of U.S. Presidents) from 1938 to 1954, whose initial design was chosen from designs submitted in a competition suggested by then-President FDR.


Below is a selection of the Duck stamps issued since 1934. Part of their appeal is that a complete collection, while not cheap, is within the reach of most collectors, especially if one is willing to settle for used copies of the older issues. Note that the year printed on the stamp is when it expires, and is always the year following that in which it was issued.

The 1959 stamp is my all-time favorite - it's the only one that shows what the stamps are really for!

The 1979 and 1987 stamps are my other favorites, just for the combination of colors and design.

The only souvenir issue of the Duck Stamp program (unless you consider them ALL souvenirs), was this special printing in 1983, to honor the 50th anniversary of the program. Ten full press sheets of 4 panes of 50 each were auctioned off, and bought by Sam Houston (Bob Dumaine), who has been slowly breaking them up and selling them off ever since. Unfortunately, there is nothing to distinguish individual stamps as having come from one of these special press sheets, so the only way to "prove" that's where an item originated is to have a gutter pair like the one above. 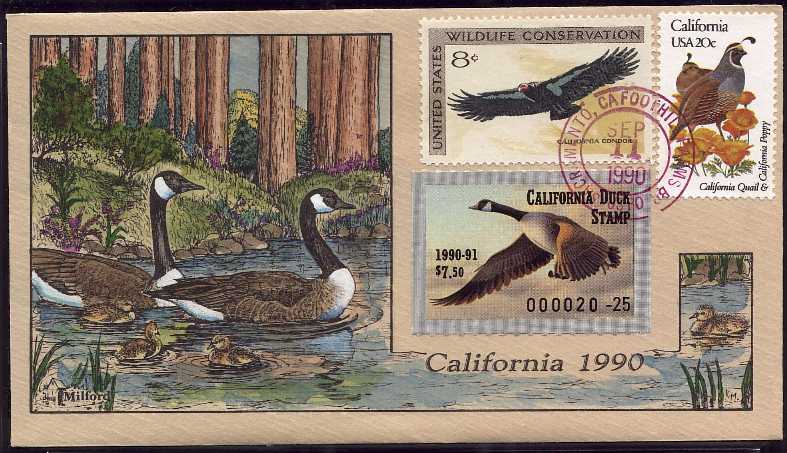 Some of the state wildlife services also issue "Duck stamps", starting with California, in 1971. None of their products is as well-produced as the Federal issue, but the proceeds do help preserve wetlands, and many collectors enjoy them. This was the 1990 California issue, turned into a souvenir on this Milford (Fred Collins) "First Day of Issue Cover" 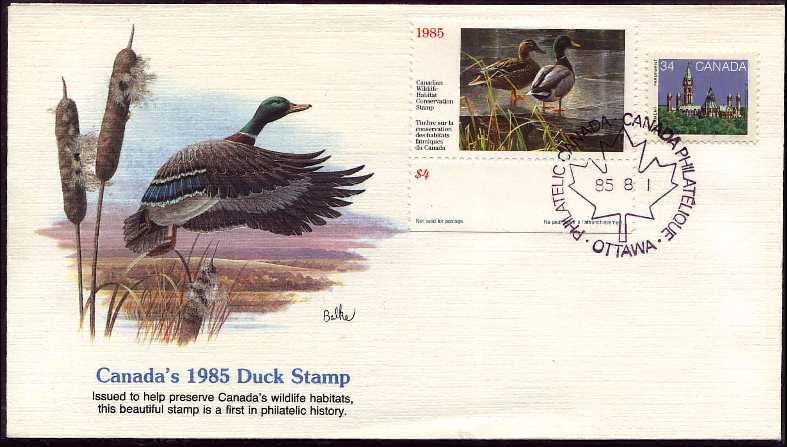 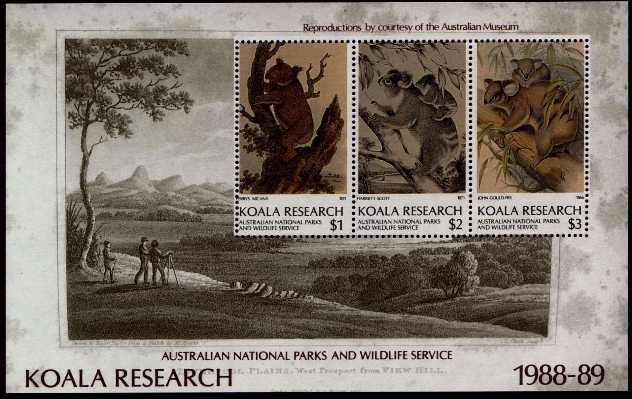 Australia even has Koala Stamps! No, they are not for a license to kill koalas, they fund research on how to preserve the little dears.

Above are the values up through 10c in the series of US definitives that was released starting in 1938, and lasting through 1954, when the Liberty Series was begun. Like the Duck Stamps, the design for these stamps was selected through a nation-wide open competition. FDR was president at the time, and he was an avid stamp collector, who took a very active part in directing the selection of topics and designs for new issues during his term in office. When the USPOD decided it was time for a new set of definitives, FDR suggested an open competition to select the new design. The 1c value above is based very closely on the winning entry, created by Elaine Rawlinson, a young NYC commercial artist, who received the $500 first prize. Taking inflation into account, that's much better payment than the artists who design stamps for the USPS receive today.

US Fish & Wildlife Service - Duck Stamp Office - if you are serious about Duck Stamps, you need to keep up with the activities of the USFWS, which issues the Federal stamps. Here's their web site to get you started.

Duck Stamp Collectors Society - and this is the society of Duck Stamp collectors, which publishes a newsletter, and conducts occasional auctions, either of which makes it worth the nominal dues they charge.

Michael Jaffe/Brookman Stamps has one of the best Internet sites for U.S. Duck stamps that I've found (that's Michael Jaffe) plus an extensive stock of U.S. and worldwide Thematic stamps (that's Brookman)