EFO's stands for "Errors, Freaks, and Oddities", i.e. misprints, misperfs, and other production blunders. Perforations shouldn't run down the middle of the design; grass shouldn't be blue; 2-cent stamps shouldn't say "5 cents" - but all of these errors have been found on US stamps.

Note that I say "have been found", not "have occurred", since production errors are a common and natural part of printing, especially for materials produced in the huge quantities common for US postage stamps - 50 million stamps is the minimum these days. But most errors are caught and destroyed in the printing plant - it is the relatively few that are missed and reach the public that concern us here. Once sold over the counter at a Post Office, an error is fair game.

Such mistakes in the design or printing of stamps are highly collectible, and can be grouped loosely into the EFO hierarchy. In general, an Error means a human error, such as feeding the paper upside down (creating an Invert Error), or skipping a step (creating a Color Missing Error); a Freak is some random production accident, such as a paper fold or a color shift; and an Oddity is some unusual but non-dramatic mishap such as a streak or smear. The appeal of EFO's is another example of the rule that "one man's trash is another man's treasure". Production Errors (e.g., Inverted Jenny) are generally the most popular (and valuable), but Design Errors make headlines too (e.g., Legends of the West). A related collecting/study area is Production Varieties, such as plate flaws, some of which qualify as EFO's as well. 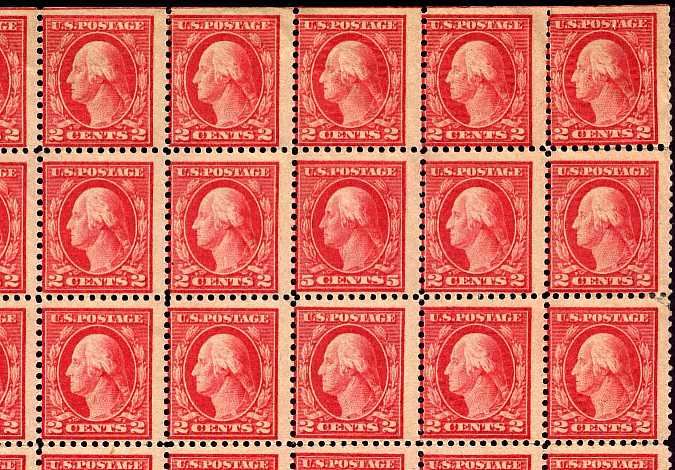 What's wrong with this picture? No, it's not the perforations, which are poorly aligned, but not so bad as to be considered freaks or errors.
Look closely at all the denominations - can you find the 5c stamp among the 2's?

What appeals to me most about this error is how it happened, since understanding that requires
an understanding of how stamps were produced at the time this sheet of stamps was printed, in 1917. Look at the stamps below.

This is part of the series of definitives in use at the time. You will note that the designs are exactly the same, except for the numerals in the lower left and right corners.

These stamps were engraved, and printed in sheets of 400, from flat plates about 18"x22". The plates were created by a laborious process of pressing steel dies against the plate to transfer the engraved image, one position at a time, to build up the full plate of 400 images. This process, called "rocking in", was automated to some extent, by the use of rollers containing multiple copies of the die. After the initial "rocking in", the plate was reviewed, and if any of the images had not transferred properly, it was erased and re-entered individually.

Keep in mind that the plate looked something like this:

Note that it was mirror-reversed and dark and glossy, since it was made of steel. And the die the siderographer used was also metal, but NOT reversed. So, noting that 5's and 2's look somewhat alike when reversed (and perhaps inverted), it would have been easy for a new or distracted siderographer to pull the wrong die from the vault for re-entry on the plate. We can also assume that no one thought to check the re-entries! In this case, there were three re-entries made, so on plate number 7942 there are three occurrences of this error, a single one in the lower right pane (position LR18) and TWO in the upper left pane (positions UL74 and UL84) - see below. If you look closely at all the examples, both above and below, you should be able to see clearly that the re-entries do not line up precisely with their left and right neighbors - this is one common evidence of re-entry.

Note that the pane above is imperforate. The distribution and use of imperforate stamps was on the decline by 1917(see "K is for Kansas City Roulettes"), so few examples of this error in the imperforate form were found, and their scarcity - plus the popularity of this error- are reflected in its value - the catalog value of the block shown above (of which only 48 are known to exist) is $24,000! The perforated version (of which there are over 100,000 in collectors' hands) is not exactly cheap, though, and catalogs at $400 for a well-centered example. 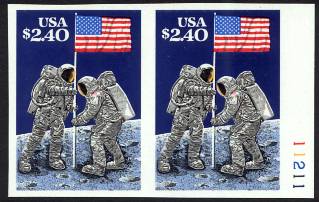 Here's an example of an "imperf error", i.e., a case where the stamps failed to receive the perforations they should have had, and were released in error. Such mistakes are supposed to be caught and destroyed at the printing plant. Like most errors, their value is a factor of relative scarcity and desirability to collectors - supply and demand. True imperfs (stamps with not the slightest trace of any perforations or marks) are popular, and this one has additional appeal because of its theme, space. Its current catalog value is $1,000.

Here are three far more common imperfs. Coil stamps like these are produced in such huge quantities, and in such a highly-automated fashion that errors get out to the public more easily. You can buy items like these for $5 or $10 each.

These are called "misperfs", and fall into the category of production freaks rather than real errors. They are far more common, and less valuable, though one with unusual visual appeal can be more expensive. Note the differing choices about how to separate them - should the design prevail, or the perfs? That's up to you. 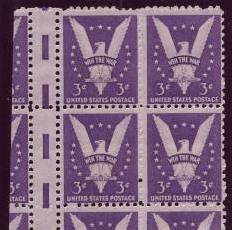 "Gutter snipes" result not when the perforating process goes awry, but when the finished sheets are mis-cut, so that the panes include parts of the selvedge that are normally cut off and discarded - or even part of the adjoining pane. These are popular for their visual appeal, but not expensive - ones like those above sell for $10 to $20.
(See my discussion sheets vs. panes )

Design Error - Legends of the West 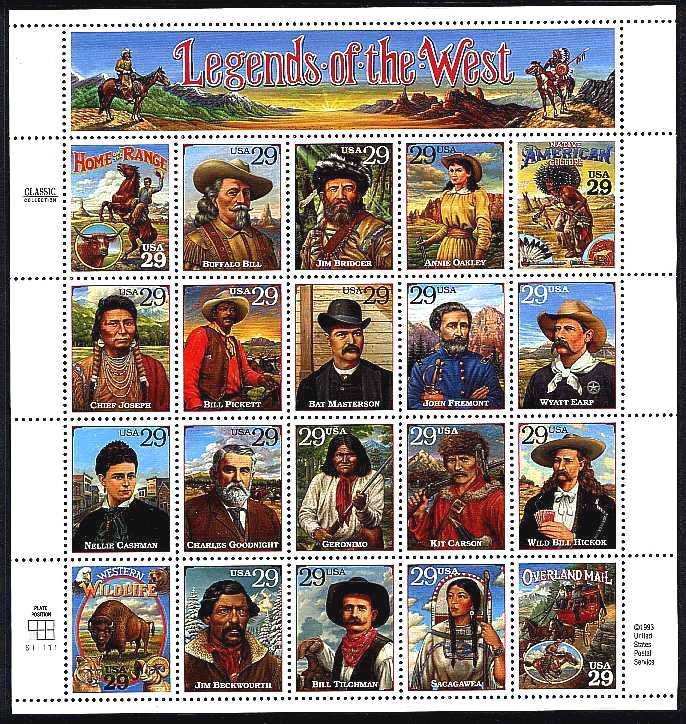 WILL THE REAL BILL PICKETT PLEASE STAND UP!

One of the more notorious design errors in US stamps occurred in 1993, when the USPS issued its "Legends of the West" commemorative pane. The full pane above is the original version, and only days before its official release date, the family of rodeo cowboy star Bill Pickett (he invented "bulldogging") protested that the man shown on the stamp was not Bill, but his cousin Ben, and the stamps must be recalled and reprinted correctly. The USPS agreed to the demands, but unfortunately, the stamps had been distributed to post offices by then, and about one hundred of the original panes had been sold, and the USPS knew that collectors would be furious when they found out they had missed their chance to get one.


What should the USPS have done? I won't offer an opinion, but what they did do was to offer 150,000 of the error panes in a sort of lottery. One sent in one's request for the right to purchase a pane at its original value, and the first 150,000 of the requests were filled. No wait, it wasn't done by date, it was simply a random selection from all requests. Oh, and I think they filtered them to eliminate duplicate requests. AND you had to include payment with the request, and they returned it if you didn't "win." The philatelic press had a field day debating and speculating and criticizing. The uproar among collectors was enormous. Almost no one seemed to approve of the "solution" chosen. I enjoyed just observing.

Watching the fluctuations in the value of the error pane since has been an interesting pasttime. There was great speculation about where the price would settle - I heard knowledgable dealers insist it would be worth little more than face value in a year or two, while others insisted it would end up in the $500 area. It went as high as $300 initially, but has now settled around $150, and it looks like that is where it will stay. 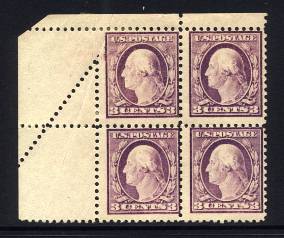 This example of "crazy perfs" resulted from a paper fold during the perfing process. The fold has been opened now, of course - can you see it? It bisects the inside of that "V". 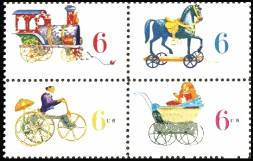 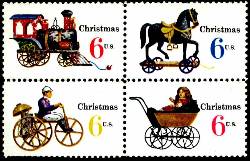 Missing color errors are another sort of production error, and like imperfs, are often quite valuable. The block on the left above catalogs $10,000. The normal block on the shows how dramatically the lack of the one ink affects the image. 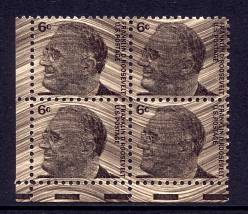 This is called a "wiping smear", and results when there is a malfunction of the rubber blade that is supposed to wipe excess ink off the printing plate right before it is applied to the paper. 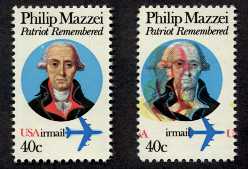 A color registration freak like this makes it obvious that the different colors were printed in multiple passes, and makes it all the more impressive that they can do it so well so much of the time. This one is fairly dramatic and appealing, but still cost me only $15. The common term for this sort of thing is "color shift".

Plate varieties can be a fascinating area for collection and study, but you need a keen eye, and infinite patience to find and identify them.

The error above falls into a category sometimes referred to as "fly-specking", since it involves details so minute and obscure that most of us would never notice them. The variety occurs only in position UR80 of plate 20637, and results from a crack in the plate used to print the stamps. It may have been created when the plate was first struck, or may have developed during use, i.e. it may not appear on all UR panes with this number.


Scott US 784 - Susan B. Anthony Commemorative
Defective Transfer - No period after "B"

This error occurs only in position LR100 of plate 21590, and results from an incomplete transfer from the die roll to the plate, so it occurs on all LR panes with this plate number.

The bible for this sort of error on US stamps is Loran French's monumental accomplishment, the Encyclopedia of Plate Varieties on U.S. Bureau-Printed Postage Stamps, published in 1979 by the BIA. It lists all varieties known at that time, and illustrates many of them.