SO what's a Kansas City Roulette? Is it the Country & Western dance craze that's sweeping the nation? A new style of barbecue? A new way to gamble? No, it's a scarce perforation variety of the standard definitives in use during the teens of the twentieth century. In 1914, the postmaster in Kansas City had a large surplus stock of imperforates he wished to liquidate, so he bought a number of seamstress's tracing wheels, scored his supplies of 1-cent and 2-cent stamps, and sold them across the counter in place of standard perforated stamps. Usually collected in blocks of four, genuine examples are scarce, since USPOD headquarters in Washington forbade the practice once it learned of the Kansas experiment, and not many were sold.

Imperforate stamps were available at that time for the users of privately-produced stamp vending machines, which required stamps in coils, a format that was not available from the Post Office prior to 1910. Coils for these private machines were produced by pasting the imperforate sheets together to produce long rolls, perforating the rolls in one direction, then cutting them into strips. Beginning in 1908 or 1909, the USPOD issued its own coils, and by 1914, most of the private vending machines had disappeared, or been converted to use offically-issued coils, so there was no longer a demand for the imperforate sheets. Hence the surplus in Kansas City.

A tracing wheel, or roulette, looks like a pizza cutter - it is used by seamstresses to cut perforated slits in paper for clothing patterns, leaving short, uncut areas between - sort of a Morse code of alternating dots and dashes. No paper is removed, but the slits make it easy to separate the pieces. 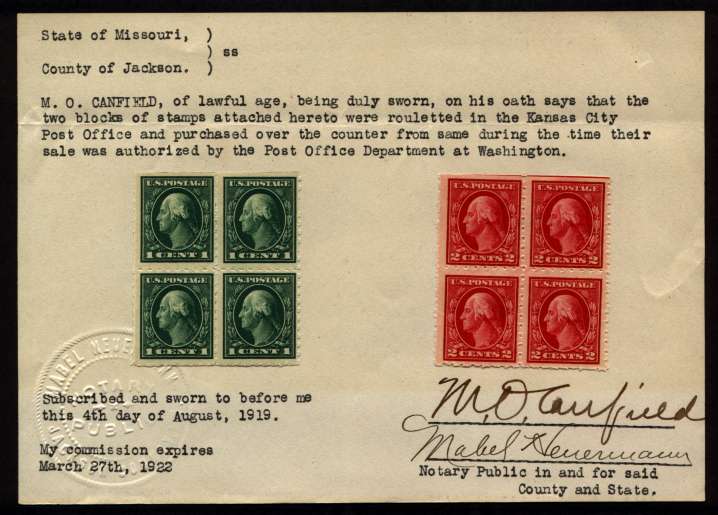 KCR's are usually collected in blocks of four, since that's the minimum multiple needed to authenticate them, and forgeries are common (catalog value per block = $150!). The image above shows a popular way of collecting the variety - anticipating the problem of proving genuineness, many collectors at that time had blocks like these notarized. It's still not proof, I suppose, but it adds a personal element that I like.

Note that the text says "their sale was authorized by the Post Office Department in Washington". In January of 1915, such authorization was indeed given, but only to sell the remaining stock of the rouletted stamps. Further perforation of imperforate sheets by Postmasters was forbidden, except with prior approval, and either no one else sought to do anything similar, or permission was denied, as there are very few other manual perforations. ("San Francisco Roulettes" were produced in 1907, to correct a missing row of perfs on sheets of stamps in the SF PO. "Cleveland Roulettes" were created during a 1914 Christmas holiday shortage of perforated stamps. Both of these varieties are even scarcer than the KCR's, since quantitites produced were small, and collectors did not learn of them until well after they were available. In the case of the KCR's, quantities were large enough, and they were available over a long enough period, that collectors and dealers were able to buy them. See page 54 of The Stamp Machines and Coiled Stamps by George P. Howard, pub. H. L. Lindquist, 1943 and pp. 99-100 of United States Postage Stamps by Max. G. Johl, Quarterman reprint of 1976.)

The earliest stamps in this country, as in most countries at that time (see F is for Firsts), were issued imperforate, i.e. totally without perforations. One had to cut or tear them apart. Perforations became standard on most stamps in the late 1850's, and for the next fifty years there was no need for unperforated stamps, so they were not available. So why did the Kansas City Postmaster have so many imperforates in 1914?

In the early years of the 20th century, coils and booklets were still experimental formats - until 1914, all stamps were printed on hand-fed, flat-bed presses, one sheet at a time, 400 stamps images per sheet. The sheets were then gummed, perforated and cut into quarters to produce standard panes of 100 stamps for sale at Post Offices - that was the only official stamp product available. But many companies used stamps in such large quantities that some sort of automatic method for affixing them to mail was a necessity, and automatic affixing machines were the logical answer. Enterprising inventors created such machines, but they required coiled strips of stamps, not sheets, and there were no coils available. Private companies and individuals who wanted coils of stamps for vending and affixing machines had to create them themselves. Some experimented with producing coils from the standard sheets, but found that perforated stamps worked poorly. In 1906, the USPS responded to the requests of these parties by issuing stamps imperforate, in full sheets of 400. From these it was possible to produce coils by gluing together the sheets to form long rolls, which were then cut into strips to produce coils. Most of the companies added perforations of some sort to the coils, if only to help the machine and its user find the proper place to cut stamps as they were fed out of the machine.

Below are diagrams showing both the layout of stamps on a sheet of 400 (at left), and the operations necessary to convert sheets to coils (at right). The process required pasting together sheets at the sides, cutting the result horizontally into long strips, then perforating and coiling the individual strips. It was tedious and makeshift, but demand was great enough, and the savings to users significant enough to pay for the labor involved.

As coils grew in popularity, the demand for official coils grew as well, and in 1908 the USPS started producing its own coils, but it still used the same method private parties had, i.e. it pasted sheets together and then rolled and slit the lengths thus formed. It even charged a premium for the coils, a cent or two over their value as postage, to recover some of the additional costs of producing them. Finally, in 1914, the BEP developed a rotary printing press that could print endless rolls of stamps, and the modern style of coil was born. Production and distribution of imperforate stamps declined slowly from 1910 on - the last official imperforates of regular stamps were issued in 1926.

Note that pasting the sheets together created what are called "paste-up pairs," i.e. pairs of stamps every twenty stamps in a roll with a joint where the two sheets had been pasted together. Some collectors seek these, while others scorn them - I like them as examples of an important chapter in the history of US stamps.
(Here is a story about an interesting paste-up single I own)

The coil manufacturing process also created what are called "line pairs". If you look at the diagrams above, you will see that the sheets of 400 had lines running horizontally and vertically down their centers. These were placed there to guide the process of cutting the full sheet into four panes, and had no value for the coil-manufacturing process, but it was easier to leave them than to create special plates for coils only. The horizontal line was cut off in the coil-making process, but the vertical one showed up on every twentieth pair, and collectors like these far more than the paste-up pairs. They usually command a significant premium over ordinary pairs.


Other examples of Rouletting on U.S. stamps

Until recently, there had been few officially-issued US stamps with rouletting, except for the set of revenues shown above, the so-called "battleship revenues" of 1898. (You may recognize the ship as The Maine, famous for its role in the initiation of the Spanish- American War in that same year - not a coincidence, as these stamps were issued to help finance that war.) I've never seen an explanation for why rouletting was used on these, but suspect it may have been for economy and speed, since the stamps had to be produced on very short notice.

More recently the USPS has used rouletting on several coils like the ones pictured above, mainly rate-change contingency stamps (see G is for G stamp). I suspect that economy is a factor again, as well as simply ongoing efforts to streamline production.

We are accustomed today to a constantly evolving variety of standard products from the Post Office, and to a variety of standard formats such as coils, booklets, and panes. The latest innovation is self-adhesives, which have rapidly become the most popular style - including self-adhesive coils, which even my 87-year old Dad uses now. And each format is printed separately on specialized equipment that often does the entire job at one time. Today's traditional coil stamps, for example, are printed in endless rolls of stamps, then cut to lengths of 100, 500, 1,000, etc., then rolled and packaged, all with no interruptions in between the various steps. Their format and production is totally different from and separate from the panes or booklets of stamps we buy, each of which is also printed in its own special format, and on specially designed equipment.

There are some modern vending machine booklets that look as though they were made by hand, using press sheets from other formats cut in seemingly arbitrary ways and glued into makeshift covers. According to a now defunct Linn's article these first appeared in 1996. At this writing, 1/11/2002, there are still some for sale in my local PO, so they seem to be here to stay. I see some dealers listing them, and the Scott US Specialized catalog now includes them. The 1996 Linn's Stamp Yearbook included a very informative article about them, titled "Improvised Vending Machine Booklets", but the subsequent volumes in that series have not mentioned them. Apparently they are machine-made, despite their crude appearance, initially as interim products while more professional- looking items were being developed, and now perhaps as a way to use up surplus stock.