A Local stamp is any postage stamp created by a local, private mail-carrying entity (as opposed to a national postal service).

Prior to about 1845, US mail service operated only between post offices - individuals (and businesses) were required to collect their mail from the PO serving them. Private companies (similar to today's bicycle messengers), which came to be called "local posts", offered pickup and delivery within larger cities, and some of them created their own stamps to show payment of fees. By the 1860's this practice had died, as the USPOD expanded its services - indeed, Congress passed laws making Local posts illegal, to eliminate their competition with the Post Office.

There are still a few local posts in the US, in remote areas where delivery is too random or difficult for government service. Collection and study of early locals is a popular sideline among philatelists, who prize especially covers bearing both a valid Local stamp and a US stamp. Related topics include Agents, Provisionals,Carriers, Expresses, and Forwarders.

Rest your mouse cursor over an image, and if it changes to a hand, clicking there will bring up a larger high-res version.

Some typical Local Stamps of the mid-1800's

One does not collect Locals for their beauty or color - the ones above are among the more elaborate and attractive designs; moreover, some of these are undoubtedly reprints, reproductions or fakes, as legitimate items are far scarcer than fakes. Most locals were simple text labels, poorly printed, imperforate and carelessly separated. Their appeal is in their importance to the story of the development of the mails in the US, combined with the scarcity of good material.

Locals on cover that can be authenticated as valid uses are especially prized, as the area abounds with bogus material, and most locals were either not cancelled at all, or their cancels do not tie them to the cover. The one above exemplifies the most desirable usage - with a Boyd's City Express stamp, it was carried both locally and via the government mails, as indicated by the "5 cts" in the handstamp plus the 2cts of the Boyd's stamp. This cover probably dates from 1848, when the use of government stamps to prepay mail was still not compulsory, which explains the handstamp. Boyd's, in New York City, was the largest and longest- lived of all the locals. The fact that the stamp is on an attractive Valentine cover adds to its value as well - this cover sold for $1870 in 1996. 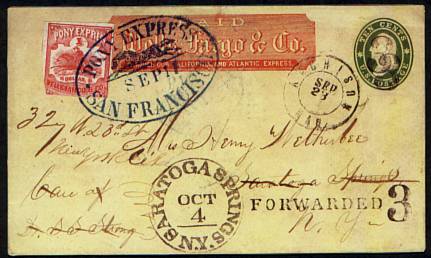 The term "Local" is often used loosely to include as well the Carriers and Express services, since all of them were a part of the same era, and performed services that supplemented the government mail service. The Pony Express, whose lifetime was surprisingly short - a mere nineteen months, from April, 1861 to October, 1862, when completion of the first transcontintental telegraph line put it out of business - symbolizes an exciting, often romanticized period of our history, and the expansion Westward. Valid Pony Express covers like the two above, with Wells Fargo adhesives and attractive, authentic handstamps, are scarce and valuable - these two sold recently for $11,000 and 18,700, respectively.

Via Nicaragua, Ahead of the Mails

This cover is a personal favorite (though I own only a photograph from a Siegel auction catalog), because of the handstamp - Via Nicaragua, Ahead of the Mails. It dates from around 1855 (based on the stamps), before completion of the first trans- continental railroad in 1869. The fastest way to send a letter from San Francisco, where this originated, to the East Coast, was via an Express company, on a steamship down the West coast to Nicaragua, across the isthmus via mule and train to the Gulf of Mexico, and then via steamship up the US coast to the Northeast! I've no idea how long either journey took, but it must have been several months; and the idea that it was faster via Nicaragua amazes me, as well as the fact that completion of the Transcontinental Railroad cut the travel time to less than a week. (The Scott US Specialized catalog shows this handstamp in the section titled "Local Handstamped Covers", under the heading "Accessory Transit Co. of Nicaragua".)

By the way, the building of the Trans-Continental Railroad in the US is a fascinating chapter in American History - an Internet search on the topic will yield you hours of interesting reading and viewing. You may know that the line was built by two separate companies, working from opposite sides of the country. But did you know they SHOULD have met weeks earlier than they did, and were preparing to lay parallel tracks (they created parallel grades, but never got as far as the actual tracks), because the government had granted them money (and land) per mile of track laid, with no stipulation that they ever had to meet? It took a special act of Congress to force the final meeting at Promontory Summit, Utah, on May 10, 1869. 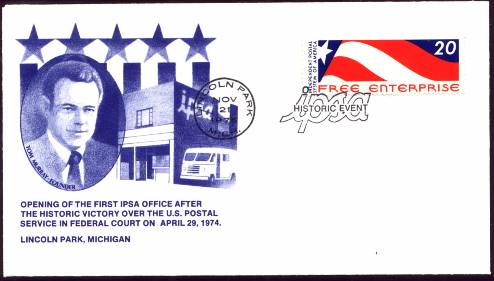 The Independent Postal System of America was a short-lived effort to establish a local/private post in the US in the 1970's. Its founder won a legal battle with the USPS and gained permission to pursue his business, but then failed shortly afterwards, partly because of the huge legal costs. He probably deserves some credit for the subsequent success of organizations like Federal Express.

A few modern local posts have existed, in remote areas the USPS does not serve. One is Rattlesnake Island, Ohio, in southwestern Lake Erie (about twenty miles north-west of Sandusky), which gets its mail service via a private plane. From 1966 to 1989, the carrier created his own stamps and postmarks, which some collectors pursue.

The most delightful episode of the history of Rattlesnake Island Local Post occurred in 1967, when The Huntley-Brinkley Report, a popular TV news show of the day, did a spot about the carrier's initial difficulties getting USPS approval for his stamps and cancels, casting the island's owners as David fighting Goliath. The spot was picked up by Budapest TV, which turned the story into a fantasy about modern American revolutionaries fighting their capitalist oppressors (Hungary was under Communist control at the time), with the bizarre result that the island received CARE packages from Hungary for several months! Keep in mind that the owners at the time were a group of doctors and stockbrokers who bought it for a vacation retreat. (Thanks to Carl Klosinski and Bob Fritz for the full story of RILP.)